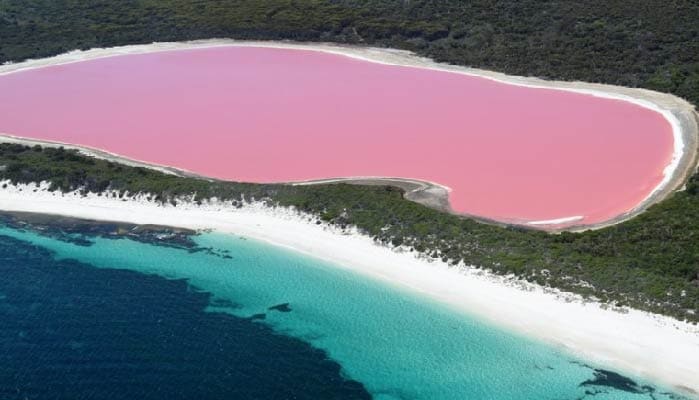 We learn from geography classes that water bodies are marked with blue on the map. But nature like to mess with us and creates oddities just like Lake Hillier in Western Australia. Lake Hillier delights your eye with its pink colour . Moreover , it lies just next to the Pacific Ocean , thus if you watch it from above , the contrast between the mellow pink of the lake and the blue ocean is striking.

With its mere 600 meters in length, Lake Hillier is not one that will impress you by its size Nor will it impress you by its diverse fishes that inhabit it . When you think of what color a lake might be ; blue , brown , maybe even green may come to mind . But i doubt you would ever associate the color pink with of body of water . Well for anyone traveling over the western islands of Australia this unbelievable phenomenon can be witnessed with their own eyes . The captivating pink lake is not a trick of the light , and it retains its hue when removed , but the origin of it’s bubble gum aesthetics remains a mystery the science community is still trying to solve . Best guess right now is that it has to do with the high salt levels in the water . Being that Lake Hillier is 10 times saltier than the ocean , it is the perfect breeding ground for the salt loving micro-algae Dunaliella Salina . These tiny little guys produce pigment compounds that absorb light like Beta Carotene which is the same kind of stuff that makes carrots orange and some cabbages purple

• For a period of six years, in the early 20th century, salt was mined from the lake, but it is not anymore. BACK TO MAGAZINE INDEX

We are collective of explorers from diverse backgrounds.
We create groundbreaking ideas and bring them to life as real-world experiences that reverberate across media channels.

HAVE YOU GOT QUESTIONS? READY TO MAKE SOMETHING THAT MATTER?
DROP US A LINE, WE’ll be in touch shortly.